Looking For Weekend Activities in October?


Looking for something to do with the kids on the weekends?  Obviously you should bring them to the READ Jr. Story Hour at 11 a.m. on the first and third Saturday of each month.  Anubis would be upset with me if I didn't mention this first.

October 5, 2012 - Just found a new listing of great things to do with the kids on the weekends.  Visit this site to see a listing of October activities in Winamac at the Tippecanoe River State Park

We'll try to keep you up to date with upcoming holiday type activities as we learn about them.

Well they're doing plenty of advertising on TV and the goodies are out in the stores, I know that you are on the edge of your seats wondering, "When will North Judson have Trick-or-Treat this year?"  If you read the minutes from the last town board meeting you already know.  But for the rest of us the "good news" is that your little ones can take to the streets on October 31st, between the hours of 5 and 6:30 pm. 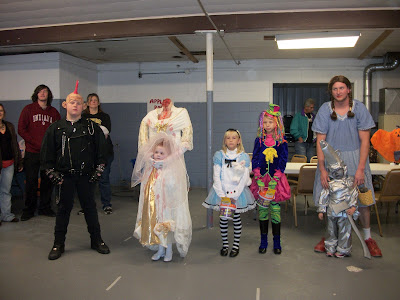 I tried the website listed and it works great; just make sure when you do the search that you don't use your nickname or it won't find you. Once I entered my first name as it appears on my license everything was fine.
No comments:

Don't forget, the town will be picking up brush for the last time starting on Monday, October 1st. I've got some in my wheel barrel waiting for that last ride out to the alley. 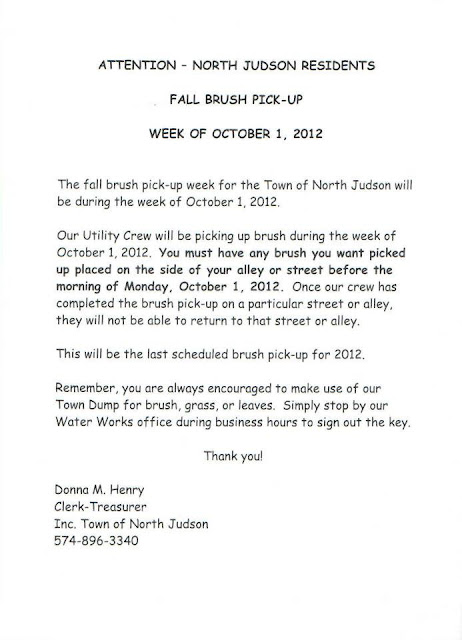 You can purchase tickets from any Kiwanis member.  Need we say more? 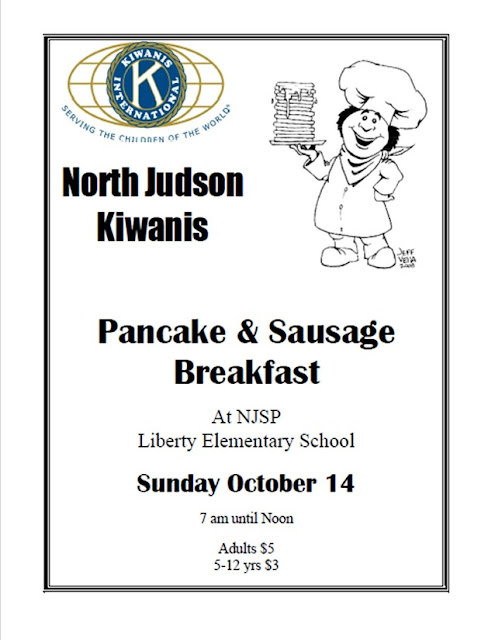 
(The following article was "lifted" from WKVI (http://www.wkvi.com/).  Thank you Ben (and sorry I don't know your last name.)

The town of North Judson’s no-tobacco ordinance is now in effect, prohibiting smoking or any other form of tobacco use in municipal buildings or properties, including parks. Clerk-Treasurer Donna Henry says the ordinance prohibits smoking and tobacco use on the premises of municipal properties or within eight feet of their entrances.

The ordinance also prohibits smoking in town parks and their park shelters or within 15 feet of the shelters.

The ordinance is more restrictive than the state’s Smoke Free Air Law, but only applies to municipal properties.

The following  was "lifted" from the WKVI website.  Thank you to Anita Gooden for the article.

A new website has been launched to help you find more information on how to make your environmental assessment payment and recycling in Starke County.

Visit www.starkeenvironmental.com where the hours for the Starke County Environmental Management District are listed, as well as the location and more information on district events. Also, learn how to recycle the items that are otherwise difficult to properly dispose of.

There is also a section on precycling, which is a process in reducing the waste of what we produce to help reduce the amount we need to recycle.

Visit the website for all of that information or call the Starke County Environmental Management District at 772-7865.
No comments:

The North Judson-Wayne Township Library will be closed on Labor Day, September 3rd.  See you on Tuesday!
No comments: 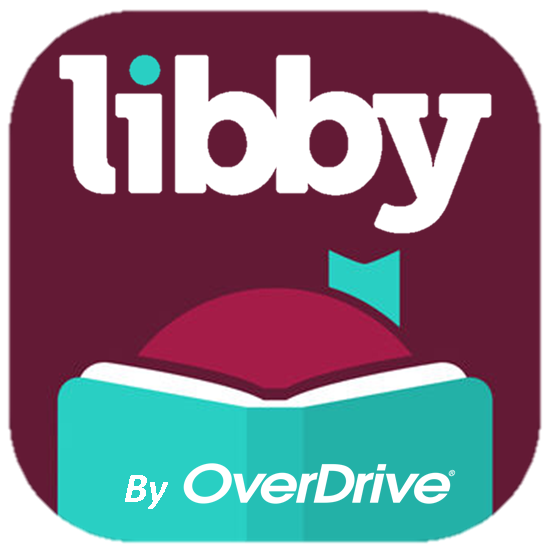